When it comes to games, there are few titles that have as much love, passion, and sheer number of products as the Pokémon franchise. Pokémon has been running strong for over two decades worldwide, maintaining a fever pitch of popularity since the original Pokemania of the late 90s.

While Pokémon has always had a strong presence on the handheld gaming markets of the world, it’s only more recently that Pokémon games have begun to appear on mobile devices that aren’t only for gaming. Smartphones and tablets have seen a slew of Pokémon and Pokémon-related titles that fans have flocked to en masse.

If you’re looking for the best Pokémon games on Android, you’ve come to the right place. Here’s our list of top contenders:

You’re reading that right: The very same Pokémon Trading Card Game that swept the nation in the 90s is still going strong, with a thriving competitive scene and loads of expansion sets. What’s best of all is that the TCG can now be played entirely on your mobile phone and/or tablet.

While physical cards are still available, the Android-based online version of the TCG is a perfect digitization of the real-world game, allowing players to skip the shuffling and card-carrying-cases and play with other people worldwide.

Pokémon TCG Online boasts seasonal card rotations, competitive ladders, and beautiful graphics, making it a joy to play on Android devices. If you ever collected Pokémon cards, the TCG Online should not be missed!

Pokémon Duel is a competitive, online strategy game that is played using digital Pokémon figurines on Android devices. To play the game, you build a deck of ability cards that allow your figurines to take actions on the board. Games can be played both cooperatively and competitively with AI players who grow increasingly challenging as players progress through the constructed PvE mode.

The game features tons of Pokémon, stellar art, and even lets you unlock Z-moves for the Pokémon you collect. If you’re looking for a new way to play with the Pokémon you love, Pokémon Duel might just be the game for you. While less focused on the collect-and-catch style of play that most Pokémon games feature, this game has plenty of strategy, both in how you handle the board and how you win your battles.

Pokémon Quest is an adorable, mobile-friendly game of herding Pokémon and directing them in battle. Instead of controlling a trainer directly, you get to see a 3D Pokémon world from the top down, guiding free-roaming Pokémon through countless adventures.

The art style of Pokémon Quest is certainly a draw, with cute, cubic interpretations of Pokémon hopping around in a bright world and classic, Game Boy-style music pumping through the speakers. The battle system is a simplification from the mainline Pokémon games, with enough depth to keep it interesting without being too difficult to be enjoyable on the go. You’re also able to customize the habitats your Pokémon live in, adding an element of creativity and personalization to an already intriguing game.

While this game isn’t necessarily the right match for fans looking to find something more challenging than the mainline Pokémon games, it’ll certainly satisfy people looking for a fun, upbeat, casual game with beautiful visuals.

Let’s Go Pikachu is unique on this list in that it’s the only game here that doesn’t have an official Android release. While custom, fan-made ports of games aren’t everyone’s cup of tea, if you’re the curious type you’ll find that highly-rated versions of Let’s Go Pikachu have been ported to Android.

In Let’s Go Pikachu, players will experience a blend of Pokémon Go gameplay and mainline Pokémon gameplay. Set in the Kanto Region of the Pokémon Universe, players get to enjoy Pokémon from nearly every game that’s ever been released, including mega-evolved forms. You can explore a classic environment with upgraded graphics while still hunting down all but the absolute newest generation of Pokémon.

Using an evolved-form of motion-based controls something like those in Pokémon Go, most of the gameplay is closer to a mainline game, where you’ll battle other trainers, explore caves and forests for rare Pokémon, and seek out new moves to teach your friends.

One of the best features, though, is the Pikachu that rides on your shoulder in-game, slowly bonding with you as you adventure through Kanto. There’s even a 2nd version of the game called Let’s Go Eevee which lets you start with an Eevee instead of a Pikachu!

While this last game on the list isn’t an official port, it can still be a lot of fun for people who don’t mind a little bit of technical tinkering. Good luck Catchin’ ‘Em All! 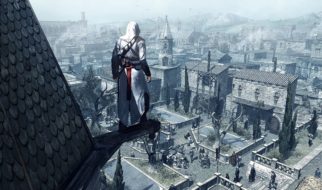